Hours
Due to COVID-19 health and safety protocols, the museum will be open by appointment only.

Visit the new museum's website here for details of how to book your visit.

The Marie Dressler Birthday Celebration was held on Sunday, November 3rd, 2013 at the C. Gordon King Centre (Library). Birthday cake and tea was served at 1:30 p.m. after which Antonio Sarmiento introduced the Dressler hit film TUGBOAT ANNIE (1933 ) with the question 'Did Dressler save Hollywood?' The celebration ended with draws for door prizes. Tickets were $8.00 at the door. 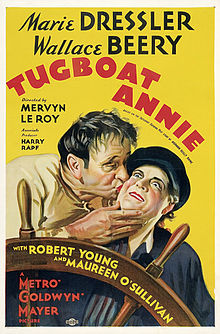 The TUGBOAT ANNIE role made Dressler a household name and Americans came to Cobourg searching for her birthplace. Lenah Field Fisher saw an opportunity and opened the Dressler House Restaurant in 1937 and the elegant dining establishment became a stopping place for travelers on Highway number two en route from Toronto to Montreal. When the fire of 1989 threatened to bring an end to this wonderful landmark, The Marie Dressler Foundation was formed to save the architectural gem. The Dressler Scholarship and Cobourg Vintage Film Festival followed.

Through the mists of time one is challenged to realize that on November 9, 1868 a very remarkable girl was born here and took her first steps to stardom on our very own front street. When Dressler was at the height of her Hollywood fame and the highest paid star she was often asked about her birthplace. Dressler readily replied, "Cobourg, Canada."

Do come and join us as we celebrate Dressler's talent, determination and her incredible success in the midst of the Great Depression.

Below are photos of this event.  Photos by Rick Miller