On Saturday, July 15, 2017, five students were presented with certificates and cheques for $1500. As well as the four bursaries for Northumberland high school students who are planning tertiary studies in the performing arts, this year an additional award was made: the Canada 150 Bill Patchett Devotion to Community Award. This is to honour the community service by Bill Patchett and was made to a student who showed exceptional community devotion.

The awards, together with bouquets of flowers, were presented by VFF Chair Cathie Houston and Foundation Treasurer Leslie Benson. 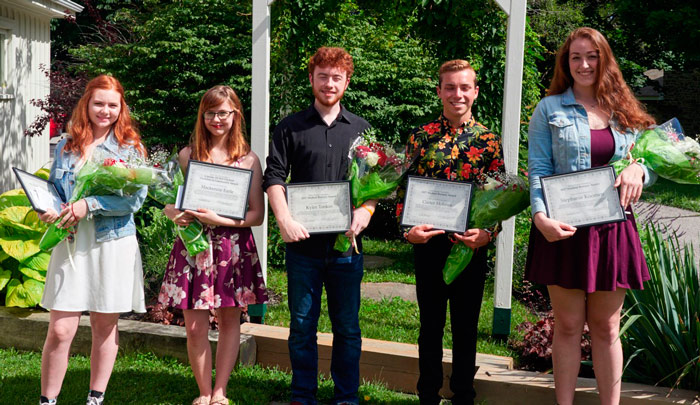 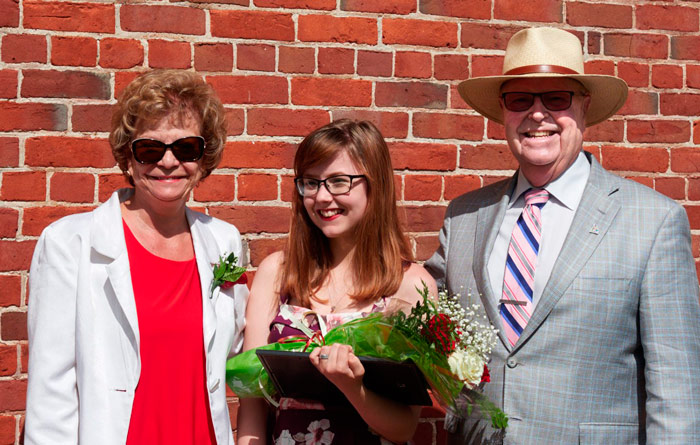 A graduate of Campbellford District High School. A dancer, actor, trumpet-player, prominent in his school’s leadership group and an active member of the Trent Hills Community Youth Advisory Council. In the fall Carter will be attending the University of Toronto for a Major in Drama

A graduate of St. Mary Catholic Secondary School, Cobourg. Enjoys writing short screen-plays and created her school’s first film club. Morgan uses her ability to help other students improve their writing skills. In the fall Morgan will attend the University of Toronto for Arts and Humanities, with a double major in English and Cinema Studies

A graduate of Cobourg Collegiate Institute. Acted in Queen Marie at the 4th Line Theatre and is a choreographer and actor for Anne of Green Gables at the VOS Theatre in Cobourg. In the fall Stephanie will attend St. Lawrence College in Kingston for Musical Theatre Performance.

A graduate of East Northumberland Secondary School in Brighton. Kyler is an actor, vocalist, musician, dancer and has been recognized for helping younger children enjoy the arts. In the fall Kyler will attend Queens University and St. Lawrence College for a Bachelor of Music

A graduate of St. Mary’s Catholic Secondary School, Cobourg. Mackenzie is academically strong and musically talented, and uses her piano skills to support the school community. She enjoys challenges and devotes time and effort required to be successful. Mackenzie is a “go-getter” who works long hours to be financially independent. In the fall Mackenzie will attend Queen’s University for a Bachelor of Arts.