Here is an Intimate Picture of Marie Dressler

IN a comfortable armchair placed in an open doorway, so that the golden warmth of the sun could reach her, Marie Dressler sat alone. Behind her was the deserted, lunch-­hour quiet of a darkened sound stage. Before her was the white asphalt of a studio street, separating her from the tree-shaded green of a little garden bordering the long row of dressing-rooms.

Miss Dressler was resting and lunching, midst peace and quiet. The food was spread on a napkin, in the seat of a chair before her.

Never had I seen Marie quite like that. She is usually surrounded by people, the centre of excitement. 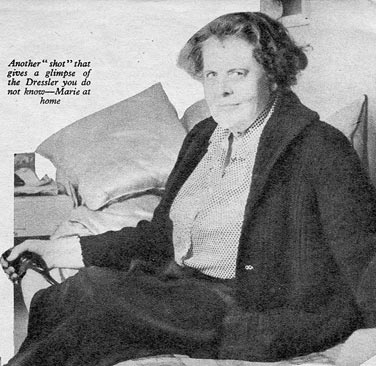 Marie Dressler at homeThat Marie, sitting in the sunlight, was a peaceful, middle-aged, contented woman, resting and thinking probably in the past. There was something heart-touchingly pathetic about her. And something beautiful.

She did not seem to be a world-famed actress at all. At that moment Marie might have been someone's grandmother, enjoying a well-earned rest, before the children and the family descended upon her in a noisy horde.

The soft, lavender shawl tucked around her shoulders, the loose, comfortable, slippers on her feet were all a part of the picture. All the morning though she had been working before the cameras, recording in celluloid new touches of amusement for the world that loves her. In a short time she would go back again, the actress.

She glanced up and saw me standing there, and motioned me to an empty chair beside her.

"Let's visit here," she invited cordially, "where it's so nice and quiet and sunny."

"I don't want to bother you--" I began. Somehow it seemed entirely wrong to intrude on the peace of that rare quiet hour in Marie Dressler's busy life. Indeed, I would have gone away without speaking to her, if she hadn't seen me.

"Bother?" she echoed, her voice as mellow as her smile. "You aren't bothering. I like to be simply lazy, and just sit and talk, on a day like this."

Marie says everything in that way, firmly, convincingly. There is a vast heartiness in her voice, in her laugh, which sends new strength and warmth into the veins of her listeners.

"You don't have to worry about bothering me. Everybody 'babies' me too much these days. You'd think I was a china doll the way people look after me," she pretended to complain, but one could tell by the softness of her eyes and the little smile at the comers of her firm mouth how much she really enjoyed this "babying." 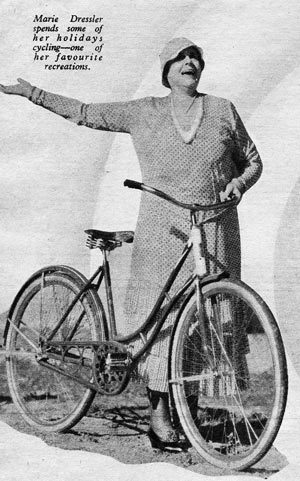 Marie began her marvellous career, depending solely on her own efforts, when she was just a little girl of thirteen years, a mere child, named Leila Koerber. She has battled the world, fought her own battles, and protected herself, and members of her family.

Yet she loves to be "babied" and domineered. Her maid, Mamie, who has lived with her for almost twenty years, takes care of her as though she were a child, and "bosses" and fusses over her. And Marie loves it.

Even in the glaring yellow light of that sunshine, she looked fine. Her eyes were clear and bright; her skin soft and miracuÂ­lously free of wrinkles. But it is that "babying" which has done it.

Birth registration records and the members of her family confirm that she was born November 9, 1871. But she wasn't. She's ageless. Hers is the eagerness of youth, with its vitality and energetic ambition, moulded by the poise and tolerance of middle age, and rounded off with the wisdom of final maturity.

She dances with the grace and lightness of the young. She can touch the palms of her hands to the floor, without bending her knees, with the suppleness of a youngster. And she converses with the wise tolerance that comes only with long years of living.

"You don't really begin to live until you're fifty," Marie Dressler has said, time and time again, and, looking at her, you know that it's true. "People are so silly. They rush around, worrying and fretting, making such a big fuss about unimportant things, and expecting so much from life. But when you're fifty, you begin to learn the foolishness of it all. If you don't expect much, you'll never be disappointed."

After years of successes, great and small, after having read miles of newspaper reviews, and stories, about herself -­ remember that Marie has been a star since she was eighteen years old - she still thrills over a newspaper clipping, or an especially good review of one of her pictures.

It's the same way with her "fan" mail. When letters arrive which tell of some good influence which she or her pictures have had in some unknown person's life, she carries them around in her always filled handbag, and reads parts of them to her friends, genuinely pleased, and grateful.

So we "visited," that is, Marie talked and I listened, watching with amazed eyes as a current of energy seemed to flow through her body, transforming her from the tired, middle-aged woman of a few minutes before to a person filled with the vitality which ordinarily belongs only to youth. "I was just thinking what fools most people make of themselves, trying to be something or someone which they aren't," Marie said, leaning forward a little from the depths of her armchair.

"One of the first things that I should teach a child of mine would be to be always natural. You don't fool anybody by pretending. Only yourself.

"One of the best examples I know of a person always himself is Wallace Beery. No one can change Wally. He is just the same man, whether he be talking to a 'prop' boy or the president of a bank. It's the same way with Polly Moran."

No wonder life is good to Marie. She refuses to let it be otherwise. And, because she has reached that point of wisdom where nothing is taken for granted, she is never hurt or disappointed.

"Of course, I'm happy," she smiled, when I asked her about it. "Why shouldn't I be? I have everything that any woman could want. Even work. And how many women of my age do you know; who can have the work that they love? Now, what more could I ask for?"

Marie's energy and vitality are limitless. She never seems to tire. The strenuous routine of her life would daunt the average young person.

She plays bridge with ardent skill, and croquet, with equal enjoyment. She loves good food, but she eats very lightly.

She likes young people around her because they stimulate her. Her closest friend is a woman of her own age, whom she has known for forty-odd years.

The beginning of each new picture is as exciting and thrilling an event as if it were the first for Marie, and she is as nervous and trembling as if she were a raw beginner, eager to make good.

And now Marie had finished her lunch. She settled back in her chair, pulling the shawl more closely around her shoulders, smiling contentedly, and waving to the passers-by in the studio street.

There I left her, Marie Dressler, ageless, and wise with the wisdom of many hard and vigorous years, utterly at peace with life.