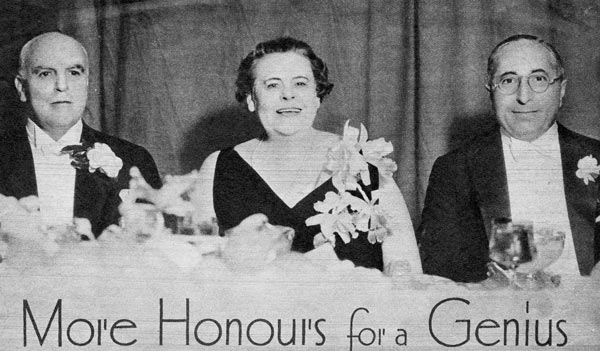 THE Most Popular Woman in the World being feted on her last birthday.
Louis B. Mayer, M.-G.-M.'s head, is on her left and the Governor of California is on her right.

More Honours for a Genius

THE union of Marie Dressler and Lionel Barrymore brings to the screen a distinguished new co-starring "Team."
They did a scene together once - two years ago. That was when they appeared at the academy of Motion Picture Arts and Sciences Banquet, the beloved Marie to receive the award for the actress and Barrymore the trophy for the actor, when the Academy proclaimed their performances the best the screen had produced that year.

Lionel, incidentally, borrowed "tails" from brother John for the occasion.

The combination of two of the screen's most brilliant veterans not unnaturally caused something of a flutter at Culver City and there was a constant audience of the studio's younger stars and players on the Christopher Bean set to watch Lionel and Marie in action.

Ever since, Sam Wood, the director, has been hunting for two more academy award winners to direct.

Every scene, Mr. Wood declares, was " built'" by the two artistes, just as carefully as an architect would build a house.

"A scene might call for the exchange of several speeches," he explains. They would start reading. Lionel watched every detail of Marie's work and speech, and she his, as the 'business' was worked out."

"Did I give you enough time for that line, Marie?" Barrymore might ask. Or "Shall I turn and look at you sooner, Lionel" Miss Dressler might inquire. Together they analysed and timed each scene as it was rehearsed, examining all sides of the situation.

"I never realised before, " Wood tells us, "what two people knowing the business as they do can do for a scene.

"I think they are the greatest lesson I know for the younger generation on the screen."

Perhaps it was not quite fair to spill the beans just now about Lionel's borrowed dress coat.

It was necessitated by an accident. Barrymore, as a matter of tact, has a reputation in Hollywood for being fastidious about clothes.

At any rate he had to put up with a little gentle" ragging" on the home lot as a result of the fact that in Christopher Bean he had to wear the same suit of clothes for a month.

The reason of this was because the entire action of the play occurs within the space of a single day.

Christopher Bean was one of the favourite pictures of the chief of the costume costs department!

While we pay deference to the precept that comparisons are odious, compariÂ­sons that are afforded by the interpretation by two great actresses of the same character are inevitable - and interesting.

Particularly when the artistes concerned are Marie Dressler, a screen actress - so great that she has solely by her art triumphed over all the conventions of filmÂ­land and all the handicaps of age and looks - and Edith Evans widely acknowledged to be one of the greatest of the" moderns" in the London theatre.

How widely different two players can be in a role and still tell the same story has, in my memory, at any rate, never been more strikingly demonstrated than in this case of Christopher Bean.

Both have claim to genius

Both stars scored triumphs in the role in their own medium. Perhaps it is best summed up by the PICTUREGOER critic, who, of course, saw both performances.

"I remember," he wrote, "when a film version of The Late Christopher Bean, the record success at the St. James Theatre, London, was being discussed, many people could not imagine anybody but Edith Evans in the principal woman's part.

"If you have seen Miss Evans in her brilliant creation, go and see Marie Dressler and you will realise that the word genius can be applied equally to more than one interpretation of the same role."

How role was conceived

Miss Dressler, of course, has not seen the West End stage star's creation of the character, but she has a great admiration for Edith Evans' prestige in the theatre.

It was necessary, however, she points out, to create an entirely new interpretation for the screen.

For one thing, she was older than and different in appearance to the artistes who played the role on the stage. (Pauline Lord, the famous American actress did it in New York.)

Their personalities were completely different, as were their methods of telling a story.

"The first thing, therefore," she says, "was to abandon all thought of the stage character and seek a new conception. Mr. Barrymore and I were to co-star, hence we had to work together and find a joint conception.

"They wouldn't believe me"

"I must confess," she adds, "that when I was first told that I was to play the role I had some misgiving.

"The stage characterisation was warm, slightly bewildered, tremulous. Miss Lord told the story of a faithful servant who had loved in secret, with arrested gesture and speech. She played a passionate but inarticulate type of woman.

"Now, I can't be tremulous. I wouldn't be believed. The public has a different conception of me, born of former roles. A screen actress, incidentally is always up against that difficulty.

"So we hit upon a more positive and direct personage - an old servant who through years of service had come to take the burdens of her employer on her own shoulders."

Had to take out the meekness

Marie believes that the nearest role she has ever played to the present one was in Emma, the role, incidentally, which won her the PICTUREGOER Gold Medal for the best acting performance by a feminine player in 1932.

"But Emma," she explains, "was an entirely different character. She was the motherly type, whereas the servant in this picture is more the chum and confidante of the younger child, but more or less suspicious of the others in the family.

I had to take out some of the meekness of the character as originally written for people don't believe that Tugboat Annie or Min or Old Marthy could be meek.

"But by careful adapting I think we told the story so that people can believe it."